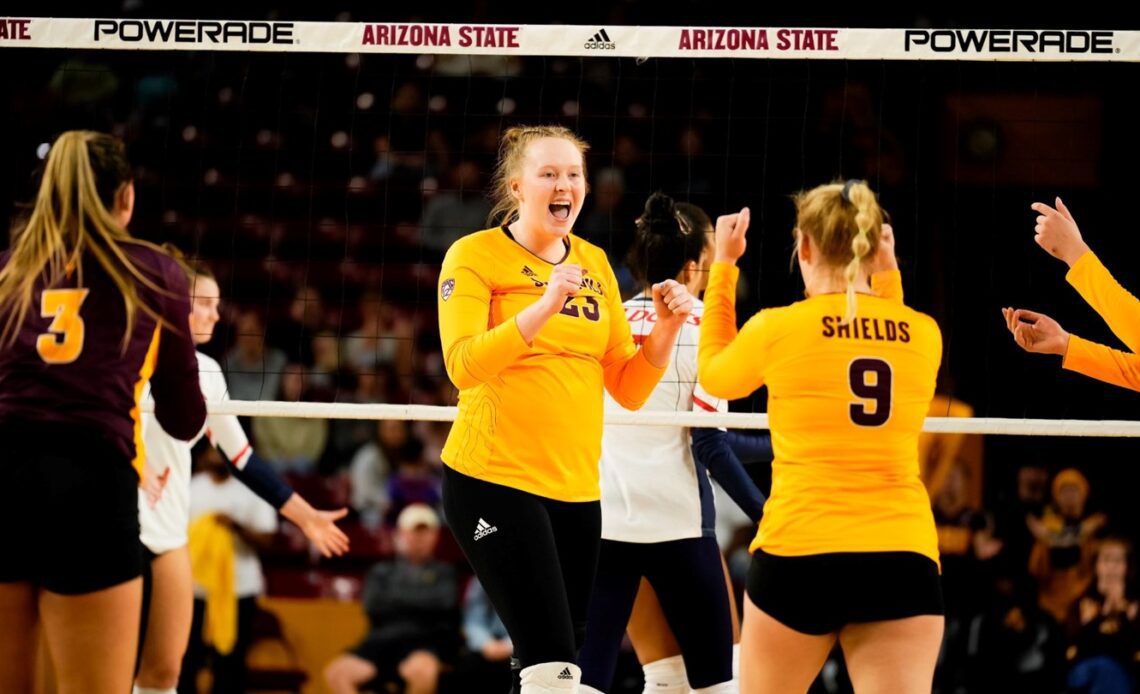 Senior outside hitter Iman Isanovic had another stand-out season as she led the team in kills (421) and service aces (32) for the third year in a row. This season, she moved into eighth place in the record book for all-time kills with 1,392. Her season high in kills was 21 and came twice against Washington and Oregon State. She led the team and the conference with the most sets played at 124.

Junior Marta Levinska had another stellar year as she also reached 1,000 career kills this season, making her the 19th in program history to do so. Behind Levinska, she was second on the team with 412 kills. She set a new career-high in kills with 25, which she reached twice against Arizona and Cal, and was the only Sun Devil with double-digit kills in a single set with 11 against Utah.

Senior setter Shannon Shields led the team in assists with 653 and was third on the team in service aces with 20. This was by far her highest assist total throughout her career at ASU. She was the primary setter as the team rotated between a 5-1 and 6-2 system, with Ella Snyder as the other setter.

At the net, junior middle blocker Claire Jeter led the team defensively with 100 blocks this season, ranking eighth in the Pac-12. She was also second on the team in service aces with 23. She was one of four Sun Devils to reach triple figures in kills with 162.

The second outside hitter spot saw a pair of players switch off. Sophomore Geli Cyr was a swiss army knife for the Sun Devils this season, starting at both outside, defensive specialist and libero. She placed in the top five on the team for almost every statistical category including, kills (225), digs (245) and aces (16). Junior Roberta Rabelo also saw time at outside hitter, totaling 93 kills on the year with three matches reaching double-digit kills.

On defense, the back row was anchored by senior Annika Larson-Nummer and sophomore Jaden Ravnsborg. The two split time at libero, with the sophomore primarily starting the first half of the season and the senior taking over in the second half. Larson-Nummer led the defense with 273 digs and had a 14-game streak of double-digits digs, which was a career high. Ravnsborg was right behind her with 256 total digs and had 15 total matches with double-digit digs. Sophomore Meadow Cooper also saw time as a serving and defensive specialist. She played in 59 matches and had 30 digs and seven aces.