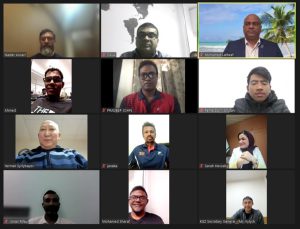 Bangkok, Thailand, January 11, 2023 – The Central Asian Volleyball Association (CAVA) Beach Volleyball Calendar in 2023 has been approved during the first meeting of the CAVA Beach Volleyball Events & Referees Committee on Wednesday.

In his speech, Mr Latheef has appreciated the continued support from AVC President Madam Rita Subowo and AVC Secretary General Mr Kiattipong Rachatagriengkai as well as the insight of FIVB President Dr Ary Graca in developing volleyball around the world.

“As South Asia has 4.8 billion people, and Central Asia alone has 77 million people, we have  greater opportunity to make the volleyball market and sell it as a product. However, we must have a long-term plan with good product”.

“We should move forward with finding ways to increase our revenue so that we could improve the level of our players and officials”.

During the meeting, all Members approved the 2023 CAVA Calendar whilst waiting for the AVC confirmation in the second place. 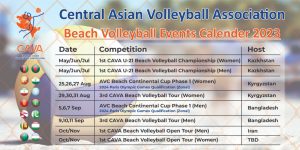 Furthermore, CAVA has also been implementing the Open Tour for the first time in the Central Asian Zone, expecting that some participants from other zones can join the fray and more attraction can be made to CAVA events.

The CAVA Beach Volleyball Referee Candidate Course is also due to be held in Kyrgyzstan in August following the AVC rules, while further qualification of the participants will be announced accordingly.