All eyes descend upon Doha for three events 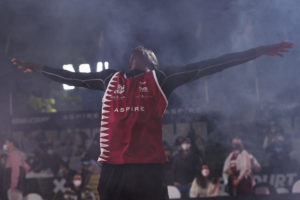 For the next three weeks, all eyes in the beach volleyball world will descend upon Doha, Qatar, which has quickly become a rising star in terms of annual hosts for major beach volleyball events.

It begins this weekend with the King of the Court, which, despite taking place in January of 2023, is actually the finals of its 2022 season, completing a four-stop tour that also held events in Hamburg, Utrecht, and the hugely successful Rio de Janeiro.

It is, as one would expect of a championship event, a star-studded field, one that includes Alex Brouwer and Robert Meeuwsen, Bartosz Losiak and Michal Bryl, Cherif Samba and Ahmed Tijan, Christiaan Varenhorst and Matthew Immers, David Ahman and Jonatan Hellvig, and Leon Luini and Ruben Penninga, among others.

Representing the USA is a fun mix of pairs and individuals, including Troy Field and Kyle Friend, and Avery Drost and Chase Frishman. Hagen Smith has been paired with Austrian blocker Clemens Doppler.

For the women, Anouk Verge-Depre, who has only played one competitive event since her partner, Joana Heidrich, suffered a shoulder injury in the bronze medal match of the World Championships, is paired with 21-year-old Menia Bentele. They played together in the 2022 European Championships, where the finished fifth. The new German duo of Julia Sude and Isabel Schneider will be making the trip, as well as Spain’s Angela Lobato and Maria Carro.

The King of the Court is just the appetizer to a three-course Qatari beach volleyball meal. Immediately following the King of the Court finals will be the 2022 World Tour Finals, which features 10 teams per gender competing for a $150,000 prize for the winners. The only Americans in the field are wild cards Kelly Cheng and Sara Hughes, and Kristen Nuss and Taryn Kloth, who punched their ticket with a fourth in the Torquay Elite 16 in December.

And all of that precedes the opening event of the Olympic qualification cycle: The Doha Elite 16.

While the full schedule has not yet been released by Volleyball World, the opening event of the 2023 beach volleyball season will be held February 1-5 in Doha, an Elite 16 that doubles as the first Olympic qualifying event. The last day to accumulate points towards Olympic qualifying is June 9, 2024. In between, teams will…