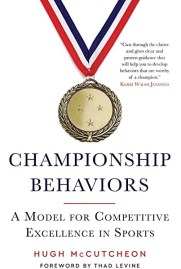 A lot of people in volleyball know Hugh McCutcheon as the now former head coach of the University of Minnesota volleyball team. A bunch (hopefully) will know him as the head coach of the gold medal winning 2008 USA Men’s National Team and the 2012 silver medal USA Women. You can add author of Championship Behaviours: A Model for Competitive Excellence in Sports as well.

Hugh coves a lot of ground in this book. By far the largest is his chapter “The Championship Model for Skill Acquisition and Application”. At about 100 pages it takes up a little over 40% of the book. That’s actually my one meaningful grumble. It could definitely have been broken down into several smaller chapters. For someone like me who tends to read in short bursts, that would have made it easier to consume. It’s daunting when Kindle tells you at the start of a chapter it’s going to take 2 hours to read!

Other chapters from the book address goal setting, motivation and mindset, leadership, trust, culture, and other considerations. The chapter immediate before the Championship Model one mentioned above focuses on Research in Learning and Skill Development. That covers things like specificity, feedback, and deliberate practice.

To give you a flavor of the book, let me share a few quotes.

“Traditional training methods tend to address the components of improvement and achievement separately. We practice to improve technically, train to improve physically, meet with a sports psychologist to improve our mental game, and then work on our team chemistry by doing some “trust falls” (or something similar). While there is nothing inherently wrong with this methodology, I have found that it is not the most effective and efficient path to achievement. I believe that a more holistic approach to competitive excellence creates significant synergies that yield more consistent results and better outcomes.”

“To start, let’s clarify what the primary responsibilities are for each stakeholder in this pursuit of significant achievement. For the athlete, for anything significant to occur, they have to work, learn, and compete. For the coach, to facilitate that significant outcome, they have to teach, coach, and mentor their athletes.”

“Teaching an athlete to perform a skill is a more clearly defined process than the idea of helping the athlete interpret the competitive environment and select the appropriate response. However, when they learn this skill,…