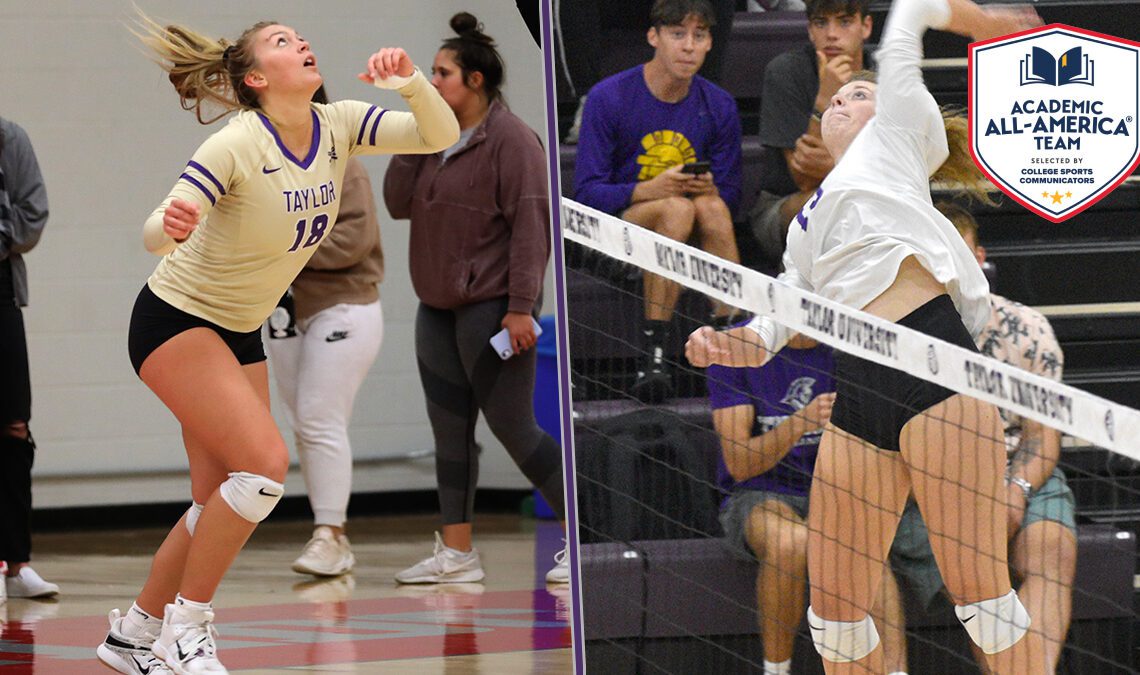 UPLAND, Ind. – Prior to the holiday season, the College Sports Communicators (CSC), formerly known as CoSIDA, announced its 2022 Academic All-America Volleyball Teams for the NCAA Division I, II, and III, and NAIA levels. Kacy Bragg and Ryan Czerniak were each dubbed with yet another honor, as the two Trojans were recognized with First-Team Academic All-America awards.

Bragg and Czerniak were two of eight total NAIA student-athletes to receive First-Team All-America recognition. Across all levels of play, only Berry, a representative of the NCAA Division III, matched Taylor with multiple players receiving first-team recognition.

The Trojan duo has boosted the program total to 10 in TU volleyball history, while Taylor athletes in general have already totaled five CSC Academic All-America awards in the 2022-2023 athletic year with four of those coming as first-team awards.

En route to her second CSC Academic All-America nod in as many years and her first first-team nod, Bragg posted a 3.83 grade-point average while traversing a psychology courseload. Meanwhile, on the court Bragg orchestrated an explosive Trojan offense, totaling the nation’s third-most total assists with 1,482 alongside the NAIA’s fifth-best mark of 10.90 assists-per-set. Along the way, Bragg became the fifth player in program history to reach 4,000-career assists and won several awards, including the Crossroads League Setter of the Year, the AVCA Midcentral Region Setter of the Year, and an NAIA Third-Team All-America award.

Czerniak, Bragg’s partner in crime and a human physiology and preventative medicine major, maintained a 3.90 GPA to earn the second national academic award of her career. Czerniak led the entire NAIA with a .385 hitting percentage by season’s end, which marked the third-best single-season percentage in TU program history. The lefty right-side hitter also became the 23rd player in Taylor history to surpass 1,000-career kills, totaling 453 for the season. Czerniak was named the Crossroads League Player of the Year, the AVCA Midcentral Attacker and…