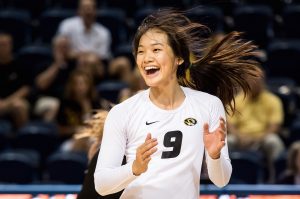 A SECRET LOCATION SOMEWHERE IN HAWAII — It began around dawn, the sun bathing its gentle morning light on the shores of Oahu. The world not yet awake, the only sounds to be heard were the lapping of the waves on a golden beach, and the deep breaths of a few men. Every now and then, a man named Douggie Johnson would stroll by and get a rare glimpse of Danny Alvarez’s training group.

“What are you doing?” Johnson would ask. “Secret training?”

And Alvarez would just grin and get back to work.

Nearly two decades after Alvarez pioneered the advent of “secret training,” what was no longer a well-kept secret was the talent of Carly Kan. The 5-foot-9 outside hitter had led Punahou, a private college prep school in Oahu, to an 18-1 record and the second of two straight Hawaii state titles as a junior in 2011 and a senior in 2012. MaxPreps named that team No. 9 in the country. The plaudits earned Kan the attention from schools around the country, as far in the mainland as Missouri, where Kan committed to play libero.

There are, of course, few outside hitters in the NCAA who stand 5-foot-9. Which is why coach Wayne Kreklow had Kan, whose talents were many, slated to play libero. But the first time Kan played volleyball in Missouri, she did so at an open gym, where Kreklow and assistant coaches Deng Yang and Lindsey Hunter were not present. It was a players-only practice, and Kan’s teammates, perhaps empathetic to the fact that Kan would not, in all likelihood, be swinging at many balls over the next four years, told her to “just hit,” Kan recalled on SANDCAST: Beach Volleyball with Tri Bourne and Travis Mewhirter. “When practice started, I was like ‘Well, when am I going to move over?’ And I never did. I never actually played libero.”

“She went to the first open gym and they said ‘I think you’re playing outside hitter,’ ” Alvarez said, laughing. Kan would become a three-time All-American — one of only two Tigers to accomplish that feat — and leave the school No. 2 all-time in kills and fourth in attacks.

But how, it’s fair to wonder, did this 5-foot-9 libero become such a deadly attacker?

Danny Alvarez was going to be a basketball coach. He played hoops, loved the game, and had…