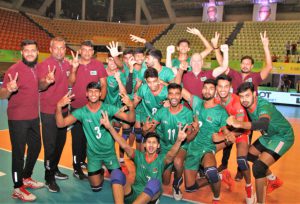 Earlier, Bangladesh maintained a perfect run in the three-day, round-robin preliminaries to top the standings with 8 points from three straight wins, while Kyrgyzstan finished second with 5 points from two wins against one loss. Sri Lanka came in third place overall with 4 points from one win against two losses and winless Nepal finished on the bottom fourth position with one point awarded. 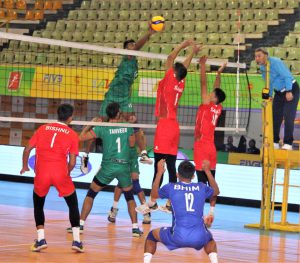 Bangladesh and Kyrgyzstan performed brilliantly and were superior in every department against their respective rivals on Sunday. The host side outplayed Nepal in comfortable three-setter 25-15, 25-22, 25-13 in 78 minutes, while Kyrgyzstan struggled in the hotly-contested first set to beat Sri Lanka 29-27 to take the next two sets more comfortably 25-21, 25-20.

Following their superb form in the semifinals, Bangladesh and Kyrgyzstan will fight it out in the final clash for the eventual title, while the two losers, Nepal and Sri Lanka, will contest the third-place playoff for the bronze medal.

In the first semifinal clash on Sunday, hosts Bangladesh had a blistering run of points under the spectacular attacks from Shafin and Redowan, solid blocks from Ratul and impeccable serving of Shafin, Sujon and Redowan, while Basnet brilliantly orchestrated the Nepal’s offence whenever he was in play to shake the strong opponents’ blocking with his powerful spikes.

Bangladesh took the easy first set 25-15 before Nepal bounced back in the second set with effective blocks from Malta and Basnet, allowing the host side attacking difficulties. However, Bangladesh seemed a side packed with more talents and they showed tremendous courage and defensive resilience to come back and snatched the thrilling set 25-22.