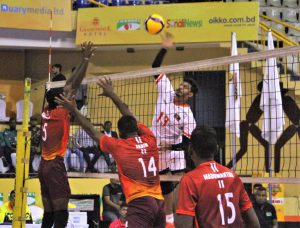 Bangkok, Thailand, December 25, 2022 – Hosts Bangladesh survived a scare to narrowly edge past Sri Lanka in hard-fought five-set thriller for a clean sweep in the round-robin preliminaries to top the standings in the 2022 Central Asian Volleyball Association (CAVA) Men’s U23 Volleyball Championship at Shaheed Suhrawardi National Indoor Stadium in Mirpur, Dhaka on Saturday.

Following their Saturday’s dramatic wins, Bangladesh maintained a perfect run in the round-robin preliminaries to top the standings with 8 points from three straight wins, followed by Kyrgyzstan with 5 points from two wins against one loss. Sri Lanka came in third place overall with 4 points  from one win against two losses, while winless Nepal finished on the bottom fourth position with one point awarded.

In the Sunday’s do-or-die semifinals, Bangladesh, the best-ranked team after the preliminaries, are due to battle it out with fourth-placed Nepal, while second-ranked side Kyrgyzstan will renew their rivalry with third place Sri Lanka. The two winning teams will set up the final showdown on Sunday, with the losers fighting it out in the third-place playoff for the bronze medal.

On Saturday, in-form Bangladesh, fresh from winning their first two encounters against Nepal (3-0) and Kyrgyzstan (3-1), played a tough match on the final day of the round-robin play against Sri Lanka. Making a confident start with 25-16 win in the opening set, the host side were seemingly cruising towards a routine victory. 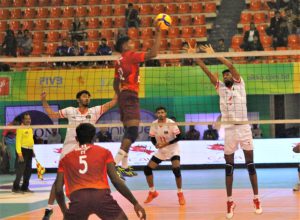 Things changed suddenly as the Sri Lankans, who finished eighth place at the 2019 Asian Men’s U23 Championship in Nay Pyi Taw, Myanmar, came back to claim the second set 25-22 and continued their fine form for the 25-23 triumph in the third set. Holding a 2-1 advantage, the strong visitors were poised to run away with the match win, but unfortunately let it slip through their fingers as they were beginning to make unforced errors in the fourth set.

Sujon, coupled with Shafin, was blocking everything at the net while Shafin’s well-placed serving and attacks were working as a well-oiled machine and hosts Bangladesh sealed the one-sided set 25-13, forcing the tie-breaker. 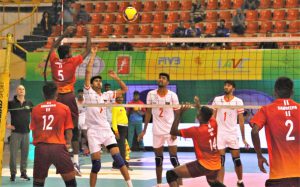