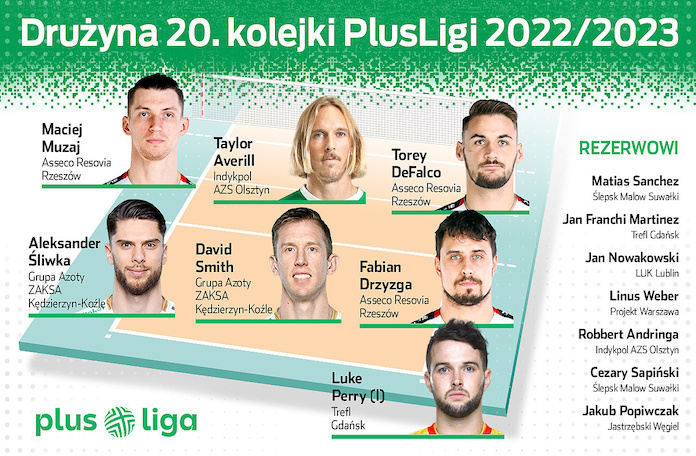 The first league championship of the season was decided just after the new year when Beijing defeated Shanghai to claim the Chinese title. Thomas Jaeschke had 12 kills (.476), three aces and a block in the deciding match. Max Holt scored on eight kills (.889), four aces and three blocks.

The latest edition of the Polish PlusLIga Team of the Week contained plenty of familiar faces, including Dave Smith, Taylor Averill, and TJ DeFalco.

Brenden Sander is back playing in Europe. After saying he was done playing indoor, Sander signed a contract with Panathinaikos in Athens for the remainder of the season. The club is taking part in the CEV Challenge Cup in addition to the Hellenic Volleyball League. One of his teammates, Jiri Kovar, was also a teammate at Lube Civitanova during his rookie season in 2018-2019.

Lube Civitanova clinched first place in Pool C and a spot in the quarterfinals with a 25-18, 25-19, 25-18 win over Benfica of Portugal last week. Gabi Garcia started at opposite and led the match with 15 kills while hitting.765
.
ZAKSA Kędzierzyn-Kozle clinched a spot in the playoffs with a five-set win against CEZ Karlovarsko of the Czech Republic. Dave Smith scored 17 points in the middle for ZAKSA, including 13 kills (hitting .722), three blocks and an ace. Erik Shoji passed 53 percent positively and 40 percent perfectly in the 23-25, 25-21, 25-18, 23-25, 15-13 win. The club remains in second place in Pool D behind Itas Trentino.
The Berlin Recycling Volleys staked its claim as the top third-place team from any pool in a 25-20, 25-16, 25-20 win against Hebar Pezardzhik of Bulgaria. Cody Kessel was used as a substitute in the second and third sets, earning a block point. Berlin remains in third place in Pool B behind Halkbank Ankara and Aluron CMC Warta Zawiercie.