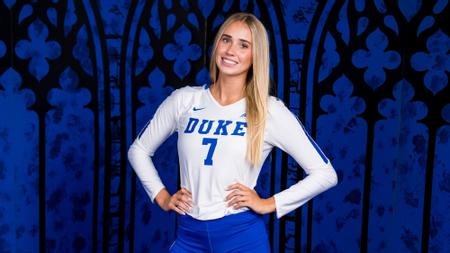 Johnson was Duke’s engine the entire fall season, but that’s no surprise with her impressive numbers on both sides of the ball. This fall, she saw her best offensive output since her arrival in Durham with 462 kills and a .203 hitting percentage. She also owns 53 aces, 217 digs and 43 blocks, proving she’s more than just an offensive threat. She finished the season ranked in the top-50 of eight national categories and in the top-five of eight statistical categories in the ACC. She led the conference in total aces and was second in total kills and total points.

The Virginia Beach, Va., native tallied 10 or more kills 23 times this season, including a career-high 29 against Wake Forest (11/16). She also racked up 20 or more kills 13 times this fall and finished the year with 20 or more in six of the final seven matches. With one of the toughest serves in the nation, she had at least one ace in 20 matches, including a career-high seven against East Carolina (9/3).