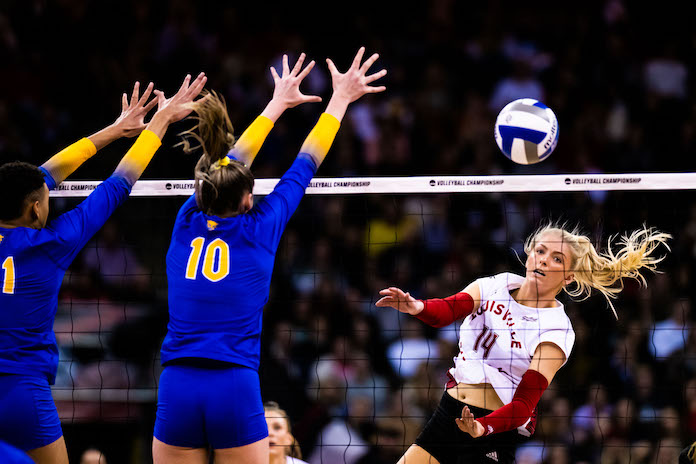 OMAHA, Nebraska — Louisville and Pittsburgh, the ACC co-champions who split their regular-season matches, gave each other all they had for four sets Thursday night.

Claire Chaussee, the ACC player of the year, lit it up with 25 kills while hitting .429 to go with two assists, three digs and three blocks. Anna DeBeer had 15 kills, hit .195 and had an assist, five of her team’s 10 aces, seven digs and three blocks. Aiko Jones had 12 kills, hit .310 and had five digs and six blocks. PK Kong had five kills with one error in 12 attacks and 11 blocks, and Amaya Tillman had four kills, hit minus .059, but had two digs and seven blocks. Raquel Lazaro had a kill, 49 assists, 11 digs and five blocks. Her team hit .273, .750 in the fifth when the Cardinals had six kills in eight errorless attacks. Elena Scott had 28 digs, eight assists and the other five aces.

Pitt’s season ended 31-4. Courtney Buzzerio had 13 kills, hit .133, and had an assist, three digs and a block. Serena Gray had 10 kills, two ace, two digs and four blocks. Valeria Vazquez Gomez had eight kills, hit .100, and had two assists, an ace and two blocks. Rachel Fairbanks had eight kills but hit .077 and had 29 assists, eight digs and three blocks. Chiamaka Nwokolo had eight kills with two errors in 14 attacks and hit .429 to go with two assists, a dig and four blocks. Lexis Akeo had 14 assists and six digs. Emmy Klika had 13 digs and two assists. Pitt hit .145, minus .353 in the fifth set.

Louisville trailed 19-16 in the third set. After a Pitt timeout at 22-22, Scott had back-to-back aces and the Cardinals won it on a kill by Chaussee, her eighth of the set.

Scott struck again in the fourth, blasting an ace that put Louisville up 15-10. Pitt used its second timeout. DeBeer followed with a vicious attack from the back row that made it 16-10. But Pitt stormed back with three points, so at 16-13 Louisville used its first timeout.

It didn’t help as Pitt clawed back and tied it at 17 on back-to-back hitting errors by DeBeer and then Chaussee. Chaussee’s kill gave Louisville the lead again 18-17. Tillman then had back-to-back blocks and it was 20-17. Pitt wouldn’t fold, and it was 20-19 after Buzzerio tooled…