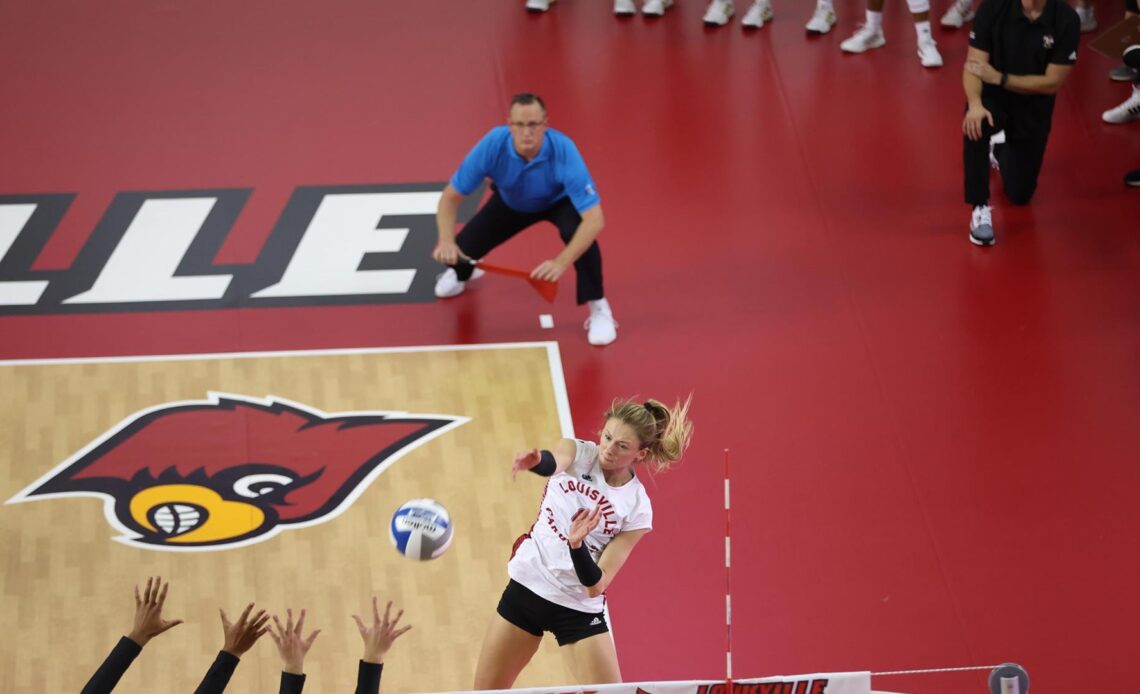 
OMAHA, Neb. (theacc.com) – In the first NCAA Championship match in Atlantic Coast Conference and program history, the Louisville Cardinals battled their way through a three-set 25-22, 25-14, 26-24 loss to No. 1 overall seed Texas.

Louisville opened up the first set with three-straight points and fought its way the whole way through. Neither team led by more than five before Texas claimed the first set, 25-22.

Texas took that momentum into the second set, jumping out to a 15-7 lead, forcing a Louisville timeout. The Cards went on a 4-0 scoring run to close the gap 15-11, but the Longhorns ran away with the second set 25-14.

With its backs against the wall, Louisville battled its way through the third set. The Cardinals and Longhorns were tied at 15-15 before Texas took a 20-16 lead. An Aiko Jones kill followed by a Texas service error cut the Longhorns’ lead to 20-18, forcing a UT timeout. Out of the huddle, Claire Chaussee’s 11th kill of the game made it a one-point game, 20-19. A challenge on a ball initially ruled out tied the game at 21-21 and the Cards took a 22-21 lead off a Logan Eggleston attack error. Anna DeBeer’s ninth kill of the night put Louisville up 24-22.

Asjia O’Neal gave Texas the ball back with a kill and the Longhorns took the next three points to claim the 2022 NCAA Volleyball Championship.

Chaussee led the Cardinals with 12 kills and Raquel Lazaro recorded the only double-double of the game with 28 assists and 14 digs.

Logan Eggleston led the Longhorns with 19 kills and Madison Skinner was right behind her with 12 kills. O’Neal recorded the highest hitting percentage of the night at .643.