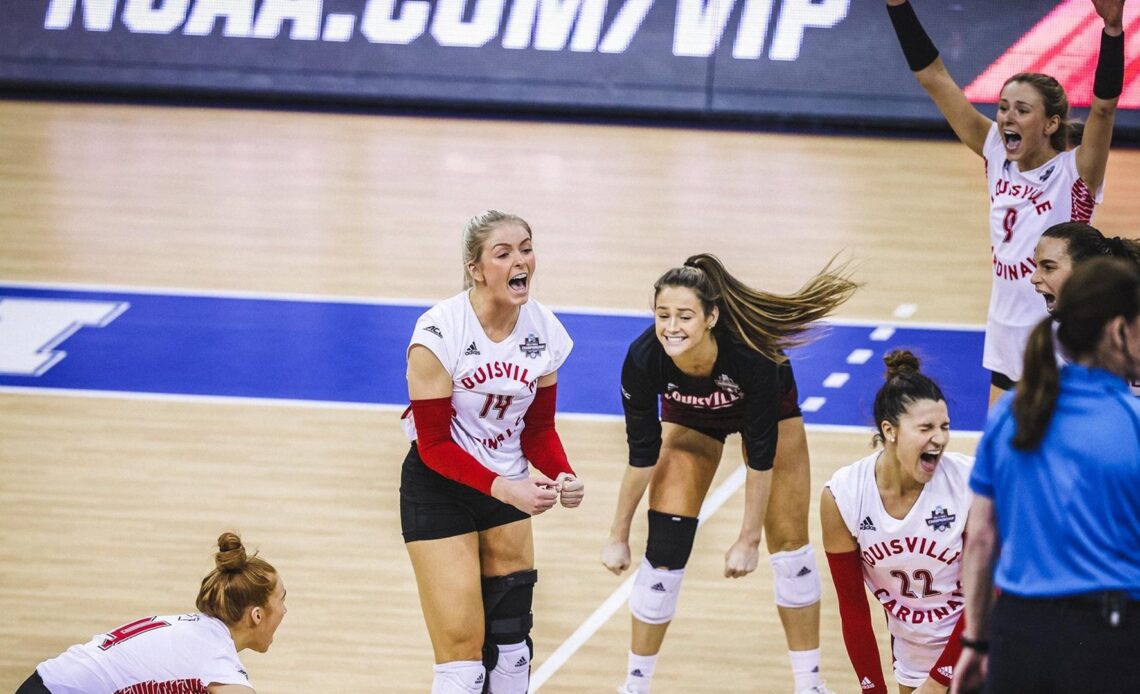 The No. 2 overall tournament seed Louisville will face No. 1 overall seed Texas at 8 p.m. on Saturday on ESPN at the CHI Health Center in Omaha, Nebraska.

The Cards opened up the second semifinal match of the night in front of 16,735 fans with six-straight points on their way to taking the first set handily, 25-16.

Pitt battled its way through the second set after scoring five straight to take a 6-4 lead. Two kills from Louisville All-American and ACC Player of the Year Claire Chaussee brought the score within one, 21-20 and 23-22, before the Panthers evened the match at 1-1.

Both teams fought through a gritty third set before back-to-back Chaussee kills tied the score at 22-22. Back-to-back Elena Scott aces gave Louisville a 24-22 lead and Chaussee’s 17th kill of the match ended the third set, 25-22.

The Cards jumped out to a 7-3 lead in the fourth set and took a 15-10 lead following Scott’s fourth ace of the match but couldn’t stave off the Panthers’ comeback, as Pitt who ended the fourth on a 5-0 scoring run.

In the finale, Louisville took a huge 8-0 lead before securing the first spot for an ACC team in league history, dominating the fifth set, 15-2.

Chaussee finished the night with 25 kills, hitting .429. ACC Setter of the Year Raquel Lazaro recorded the only double-double of the evening with 49 assists and 11 digs. Anna DeBeer added 15 kills on top of a crucial service performance that featured five aces.

Texas downed No. 2 seed San Diego in four sets on Thursday and advanced to their ninth national championship match. The Toreros took the first set, 28-26, before the Longhorns took the reins and won the next three sets, 25-16, 25-18, 25-20.

Texas is led by Madison Skinner and Logan Eggleston at the net. The two combined for 33 kills, 13 digs and eight blocks against the Toreros.
…