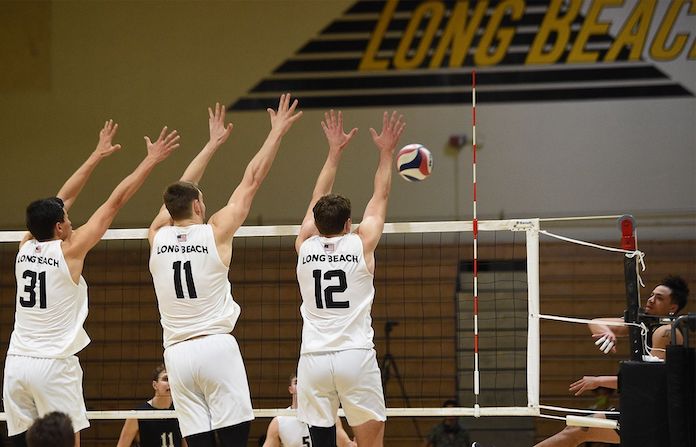 Ninth-ranked Grand Canyon improved to 4-0 with a five-set triumph over No. 14 Ohio State (1-2) in an important intersectional match on a neutral court to highlight NCAA men’s Division I-II volleyball action on Saturday.

Saturday’s recaps follow. Sunday’s schedule includes just two matches, Ohio State vs. George Mason and D’Youville vs. Charleston. For links to all matches that are being shown, go to our VolleyballMag.com TV & Streaming Listings.

Grand Canyon of the MPSF limited the Buckeyes of the MIVA to a minus .143 hitting percentage in the deciding set, and an early four-point run gave them the separation they needed to close out a 23-25. 25-18, 25-23, 18-25, 15-10 thriller at George Mason in Fairfax, Virginia. Colin Lovejoy and Jonah Gilbert, and Lovejoy and Nicholas Slight combined on two key blocks in the fifth set.

The stat sheet told a different tale than the scoreboard: The Lopes had 13 fewer kills, were outhit .380 to .326 and each team dug 24 balls. The telling difference in the match likely came from the service line, where the Buckeyes shot themselves in the foot with 34 errors.

Junior outside hitter Jacob Pasteur, a two-time first-team All-MIVA selection, racked up 20 kills and eight digs for Ohio State, but those numbers were mitigated by seven hitting errors and six miscues on serves. Junior middle Justin Howard had eight kills on eight swings with no errors.

Host George Mason (0-1) will play the Buckeyes to wrap up its Patriot Invitational on Sunday afternoon in Fairfax.

Another non-conference showdown between nationally ranked foes went to five sets as No. 8 Stanford (4-0) of the MPSF rallied to top No. 10 UC Santa Barbara (1-4) of the Big West in Palo Alto. The Cardinal swept the hard-luck Gauchos the night before, but this time needed kills by Will Rotman and Kevin Lamp to punctuate an air-tight fourth set in a back-and-forth 20-25, 25-22, 24-26, 26-24,15-12 nail-biter. Rotman needed 60 swings to log 22 kills, Lamp chipped in with 10 kills and nine digs, and Theo Snoey posted 10 kills and 12 digs. Geste Bianchi had a huge match for USCB with 26 kills, six block assists and six digs.