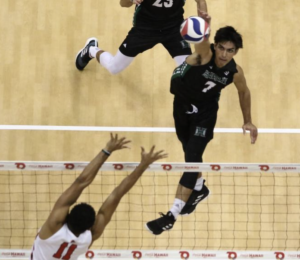 Two-time defending NCAA titlist Hawaii raised its 2022 men’s indoor volleyball championship banner and got some payback against Ball State with its second victory in as many nights on Friday in Honolulu at SimpliFi Arena at Stan Sheriff Center.

The No. 1-ranked Rainbow Warriors (2-0) of the Big West Conference dumped the Cardinals, ranked sixth in the AVCA poll and the preseason favorites in the MIVA, 23-25, 25-23, 25-18, 25-18 after also beating them in four on Thursday. That avenged two losses to Ball State in Muncie, Indiana, during Hawii’s 2022 championship season and pushed the Rainbow Warriors’ home-court winning streak to 20.

Greek national Spyros Chakas, the Most Outstanding Player of the 2022 NCAA tournament, made a huge impact again with 22 kills on 31 swings, a .581 hitting percentage, seven digs and two solo blocks. Fellow Greek Dimitrios Mouchlias also shined on the pins. ripping 13 kills, hitting .455 and serving six aces. Norwegian national Jacob Thelle, a returning first-team AVCA All-American, dished out 54 assists in setting an efficient attack that hit .439 overall and .591 in the fourth set. Libero Brett Sheward made 17 digs and had no errors in serve-receive.

Friday’s recaps and top performances follow. For Saturday’s schedule and a link to all matches that are being show, go to our VolleyballMag.com TV & Streaming Listings.

Princeton (1-2) of the EIVA surprised No. 2 UCLA in the first set at the cozy John Wooden Center in Westwood, but were handled fairly easily in the next three. The