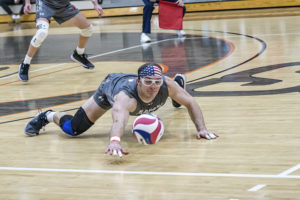 In this NCAA volleyball report, we’ve got some important women’s portal news, the AVCA men’s poll and POW, a look at the NCAA men’s Wednesday schedule and Tuesday’s results, and gratitude to Tusculum for taking and posting some outstanding photos from its match with King.

B1G WOMEN’S TRANSACTIONS: Graduate students have moved from the portal to new schools.

The situation at Ohio State is well documented (see our interview here with coach Jen Flynn Oldenburg and All-American setter Mac Podraza). Now we know where, because Podraza is headed to Penn State and her All-American libero teammate Kylie Murr is going to Minnesota.

No one dropped out, including UC Santa Barbara, which is 1-6 but still in at No. 14.

AVCA POW: The national player of the week is John Kerr. The Penn State senior opposite averaged 4.38 kills, hit 3.38 and averaged 1.63 digs in victories last weekend in Texas over Pepperdine and Stanford.

WEDNESDAY MEN: There are seven matches on the NCAA Division I-II men’s schedule, including three of the top four teams in the poll.

Top-ranked Hawai’i of the Big West which swept independent Queens in the 2022 First Point Collegiate Challenge, plays the Royals on their home court as part of a trip in which the Rainbow Warriors play three matches in North Carolina in four days. UH goes to Belmont Abbey on Thursday and to Barton on Saturday.

Third-ranked Long Beach State is at No. 4 Penn State in what could certainly be a prelude of an NCAA Tournament match this spring.