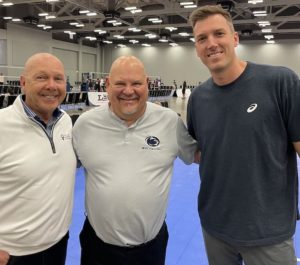 Three men’s teams in the top eight and another in the AVCA Coaches Poll gather in Austin, Texas, Friday for the First Point Volleyball Foundation Collegiate Challenge.

USC had an interesting couple of days, Penn State got a nice transfer, and Texas A&M-Commerce hired a coach.

The First Point action gets underway at 4 p.m. Central when No. 5 Pepperdine of the MPSF plays No. 4 Penn State of the EIVA.

The event in the Austin Convention Center will be streamed by VolleyballWorld.TV. It also coincides with the Lone Star Classic 18s girls USA Volleyball Qualifier and a large boys club tournament.

This is the second First Point men’s tournament in Austin. Last year, the participants were Stanford, Hawai’i, Fairleigh Dickinson and Queens. Stanford setter Nathan Lietzke is from Austin and his parents, Glen and Kathy, brought the event to his hometown.

Things got started Thursday night with a boys clinic run by former Texas, USC and USA Olympic coach Mick Haley. All four of the college coaches — Stanford’s John Kosty, Penn State’s Mark Pavlik, Pepperdine’s Jonathan Winder and Dan Friend of Lewis — and their players participated. There were more than 150 boys on the many courts in the convention center.

Click here for more information on the First Point Collegiate Challenge, here for the Southwest Boys Classic, and here for the Lone Star Classic 18s.

There are some other key early season NCAA Division I-II matches Friday, not the least of which is No. 2 UCLA of the MPSF playing host to No. 12 UC Santa Barbara of the Big West.

Want to watch a match? If it’s being shown, we have the viewing links in our VolleyballMag.com TV & Streaming Listings.

FIVES FOR USC: High and low, as the No. 10 Trojans lost in five at No. 7 UC Irvine of the Big West on Wednesday and then won in five at home against UCSB on Thursday.