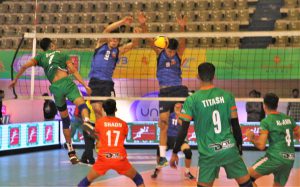 Bangkok, Thailand, December 23, 2022 – Hosts Bangladesh won the hotly-anticipated encounter against Kyrgyzstan to become one of the strongest teams to be reckoned with in the 2022 Central Asian Volleyball Association (CAVA) Men’s U23 Volleyball Championship, as Sri Lanka captured their first win following their 3-0 demolition of Nepal at Shaheed Suhrawardi National Indoor Stadium in Mirpur, Dhaka on Friday. 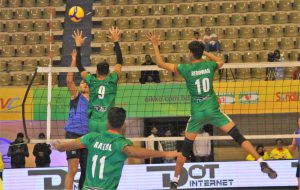 The first match was expected to be a tight battle between two sides which were searching for their first win. However, things went the Sri Lankans’ way.

Sri Lanka, which suffered their first 1-3 loss to Kyrgyzstan the previous day, showcased a dose of grit in this more comfortable match against Nepal, beaten in straight sets by Bangladesh on Thursday. 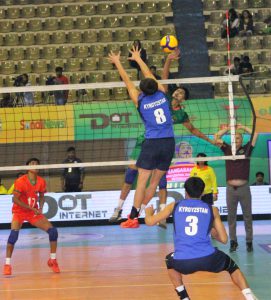 After going down in close opening set 24-26, the Nepalese side had no answer for the irresistible Naveen and Kavishka, both of whom unleashed powerful attacks, to go down tamely in the next two sets 18-25, 17-25 to succumb to two losses in straight sets in this championship. 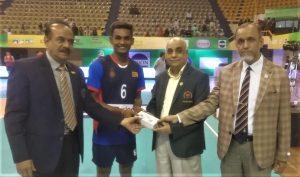 Naveen chipped in with 20 points including 19 attacks for Sri Lanka, while Kavishka added 16 points. K C led Nepal with 12 points. Aside from emerging as the Sri Lanka’s top scorer, Naveen also landed the Man of the Match.

Meanwhile, against in-form Bangladesh on Friday, Kyrgyzstan battled hard in the first set, which was incredibly close with neither side able to break clear, but it was the host side which played a little better on the home stretch to take the closely-contested first set 26-24.

Going down one set, Kyrgyzstan fought back in the second set and fortunately, the momentum was with the coach Aliev Bakyt’s men. The strong visitors put the host side under enormous pressure with the spectacular attacks from Zheenbek Uulu and Medetbek Uulu to win the set 25-21.

The third and fourth sets became more thrilling as Bangladesh rediscovered their mojo. Redowan and Shafin were constant threats from spike range and Titash’s well-placed serving and blocking ability proved a thorn in the Kyrgyzstan’s attacks. Despite putting on a gallant fight, Kyrgyzstan were never able to close out the sets and Bangladesh…