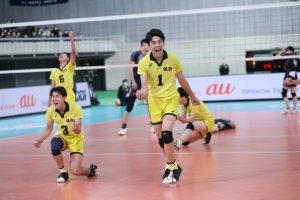 The boys’ team of Sundai Gakuen Tokyo and the girls’ team of Furukawa Gakuen Miyagi won Sunday’s finals of the All Japan High School Volleyball Championship in Tokyo to celebrate as 2023 Haruko Volley champions. Both gold medal matches, streamed live on Volleyball TV for the first time, were resolved in exciting five set battles.

“We were able to play on this stage with spectators, so we could win the championship with the parents and teachers supporting us. I’m very happy that we were able to pay them back with this win.”

Until the final, Sundai had not dropped a single set at the tournament. As one of the seeded teams, they started their participation in this year’s finals directly from Thursday’s second round, when they mastered a 2-0 (25-11, 25-11) shutout of Hirosaki Technical Aomori. They played two games on Friday, managing a 2-0 (25-8, 25-23) third-round win over Omura Technical Nagasaki and a 2-0 (25-19, 26-24) quarterfinal victory over Higashi Fukuoka. In Saturday’s semifinals, when a best-of-five format was already applied, Sundai hammered out a 3-0 (25-19, 25-13, 25-20) sweep of Narashino Chiba in front of 6,700 spectators.