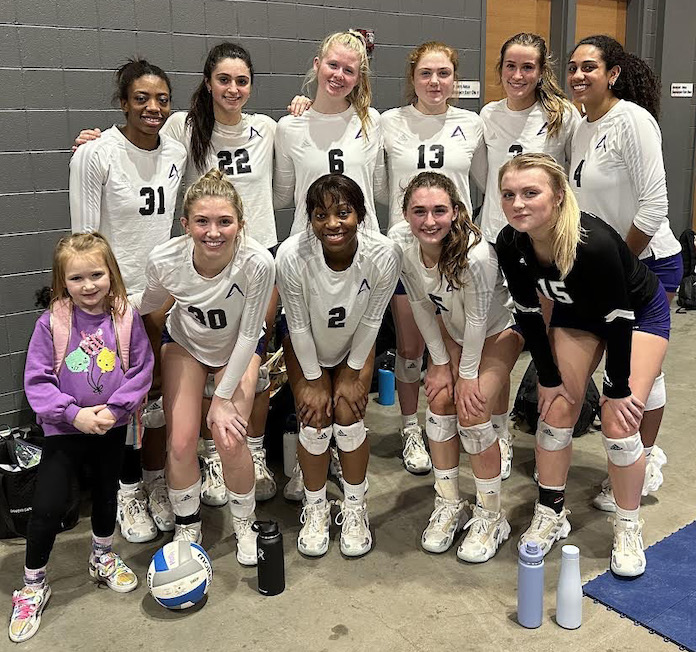 This is “Dots,” VolleyballMag.com’s weekly look at 10 things in club volleyball, past or present, that interest me and hopefully will interest you. Look for Dots every Tuesday through Junior Nationals this summer:

• The 30-team 18 Open division at Windy City was uncommonly competitive. No team finished the three-day event unbeaten. The top two qualifying teams combined to lose five matches. Only Mintonette lost just once. Only five teams won one or fewer matches.

Sunshine 18 LA overcame pool play losses on the first two days to win with a 9-2 record. The team, coached by Cari Klein, lost to North Pacific Juniors 18 Forefront, out of Oregon, on Day 1; then fell to Legacy Adidas 18-1 on Day 2 before winning its last five matches. NPJ finished 13th, Legacy 15th, a testament to how competitive the event was.

Klein said that depth of the field required a full team effort to win. She singled out pin hitters Torrey Stafford and Olivia Babcock for carrying the offensive load taking sets from Sydney Floyd and Kahealani Carvalho. Drew Wright  was “crazy good” defensively and MB Dior Charles was very effective behind the service line.

Sunshine swept region rival WAVE in the championship match after being pushed to three in Gold pool action by both Mintonette and FC Elite 18 Elite.

WAVE reached the final by going 3-0 in its Gold pool, including a three-set win over Club V 18 Ren Reed and a sweep over Circle City 18 Purple.

Mintonette defeated Circle City for the second time in as many days to clinch the third and final bid.

Adversity 18 adidas tied for seventh despite playing without its libero, who was at a national beach qualifier. The team had to survive two one-set tiebreakers to make it to Gold on a Saturday in which the team spent 11 hours in the…