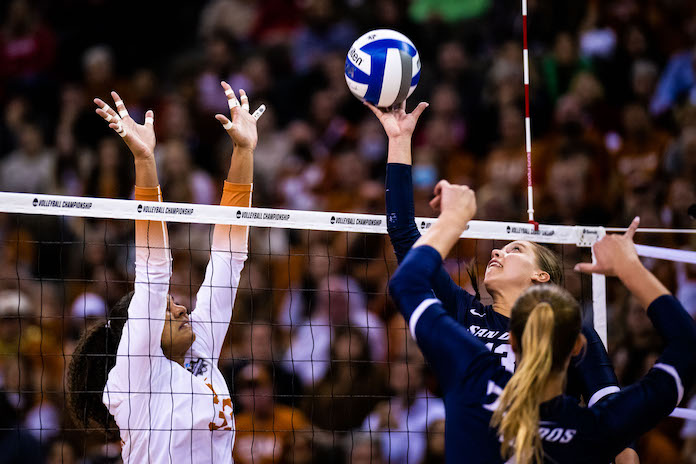 But in the end, she was like a locomotive leading the Texas train that put the Longhorns in Saturday’s NCAA volleyball national-championship match with a  26-28, 25-16, 25-18, 25-20 victory over San Diego.

ACC co-champions Louisville and Pittsburgh played in the second semifinal.

Madisen Skinner led Texas with 17 kills and hit .394 to go with an assist, four digs and three blocks. Eggleston, who at one point in the first set had more errors than kills, finished with 16 kills, five in the fourth set. She hit .196 and had one spectacular fourth-set assist, an ace, nine digs and five blocks. Molly Phillips had 14 kills, hit .412, and had two digs and a block. Asjia O’Neal had five kills, hit .333, and had a dig and four blocks.

Texas had only lost the first set previously four times this season, three times in the first nine matches of the season, and won every time.

The first challenge came soon after. San Diego took an 18-15 lead on a two-handed push by Blossom that was ruled to have gone off Eggleston. Texas challenged and the call was overruled.

Sloppy play ensued but Texas took a 21-20 lead on a block by Eggleston and Kayla Caffey of Edwards and San Diego called time.

Eggleston hit out to make it 21-21 and Edwards blew a ball through the block and the Toreros led 22-21. That led to a Texas timeout.

Eggleston got a kill, Blackwell crushed one out of the middle and it was 23-22 San Diego. But Eggleston tied it with her fourth kill against four errors.