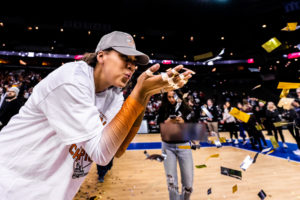 To get to the end, go back to the beginning.

“Our team is the deepest I’ve ever had as a coach, it’s the most talent I’ve ever had,” Texas coach Jerritt Elliott said last August, three weeks before the NCAA season began.

He added, “We know we have the talent. We’ve got four months to mesh them because they’ve never played together. They don’t know how to play together yet. They don’t know what their buttons are when the pressure is on. They’re going to have to learn all that stuff. That’s going to be the key for us.”

Texas completed a nearly perfect season Saturday night with its sweep of Louisville in the NCAA championship match. The only stumble in a 28-1 year was on October 23 at Iowa State, a match in which the Longhorns dropped two sets by 27-25 scores and lost despite hitting .359 and getting 13 blocks.

“100 percent. I don’t think it’s ever good to go undefeated in a season because you don’t know how to battle through adversity,” Eggleston said. “I think we learned a lot about ourselves as players and as a team and through that game and what we could do better.”

“I think if we hadn’t have lost that game, I don’t know that some of the conversations we had and some of the areas that we improved on would have happened,” Eggleston said.

“So I’m honestly really grateful that we hit that kind of roadblock in the middle of the season because it made us so much better throughout the end.”

The bigs, of course, got theirs for Texas in the 25-22, 25-14, 26-24 victory over Louisville, which, it can’t be overstated, was a fantastic college volleyball team. Eggleston had 19 kills, Madisen Skinner — who won the NCAA title for Kentucky when it beat Texas in the spring 2021 final –12, Asjia O’Neal nine and Molly Phillips six. Between them just eight errors in 98 attacks.

They were fantastic. Zoe Fleck…