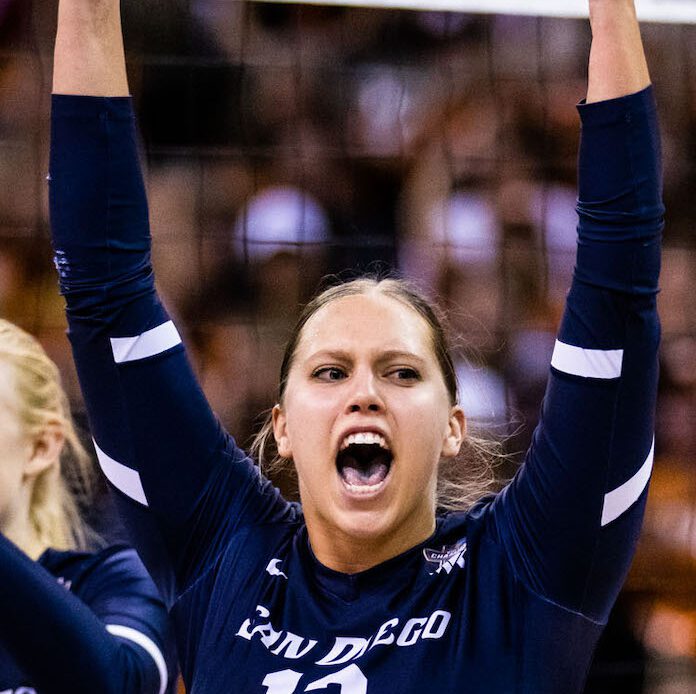 Logan Eggleston of Texas, now the two-time VolleyballMag.com national player of the year, leads the 2022 VolleyballMag.com All-American teams. Read all about Eggleston here and watch our interview with the Texas outside hitter. She was joined on the first team by national-champion teammates Zoe Fleck and Asjia O’Neal.

The VolleyballMag.com national freshman of the year is Mimi Colyer of Oregon. Every one of our voters had Colyer No. 1. Eva Hudson of Purdue was named on nearly every top-freshman ballot, and Florida’s Alexis Stucky, Baylor’s Averi Carlson, Wisconsin’s Gulce Guctekin and Stanford’s Elia Rubin also received votes.

The coach of the year is San Diego’s Jen Petrie. Read about her here and watch our interview with the coach who took her team to the NCAA semifinals for the first time.

Once again we have four All-American teams — we started that in 2018 because in our talent-rich sport three teams simply aren’t enough — and an honorable-mention list.

While in this particular year our top honorees of Eggleston, Colyer and Petrie mirror that of the American Volleyball Coaches Association, our teams don’t. VolleyballMag.com voters were instructed to list four teams and each had to include at least one setter and one libero. What’s more, VolleyballMag.com is not beholden to the restrictions and nominating process that the AVCA adheres to and we also wait until after the NCAA semifinals and final to conclude voting.

Picking these teams is not easy and our voters were diligent and thorough. Not all agreed on who should be on which team, but everyone who watches, plays, coaches and appreciates NCAA Division I volleyball can agree that the following list of players is quite impressive.