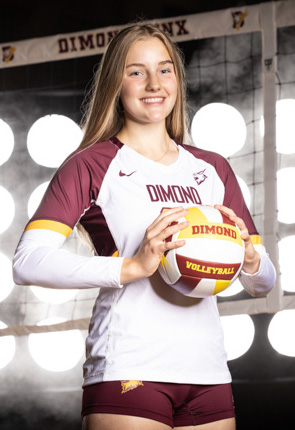 VolleyballMag.com presents its players of the year for all 50 states and the District of Columbia.

Thanks to the more than 150 coaches nationwide surveyed for their input, and to the great players considered for these honors.

ALABAMA
Anna Grace Sparks, 5-11 Sr. OH, McGill-Toolen (Mobile)
Sparks was listed as the No. 5 senior in the state in the preseason. The Queen’s University recruit proceeded to lead the Dirty Dozen to a 51-8 season, which included a 7A state title, the 22nd title in school history. Sparks was named MVP of the state championship match, first team All-State and an AVCA first team All-American. Over 154 sets, Sparks amassed 570 kills, 314 digs, 41 aces and 37 blocks. She plays at a different level than the rest of the state, head coach Kate Wood said.

ALASKA
Lauren Sulte, 5-11 Sr. OH, Dimond (Anchorage)
The Lynx captain the past two seasons, Sulte led her team back to the top of the 4A heap in 2022. She had 18 kills and 19 digs over four sets in the championship matches versus West Anchorage, capping a year in which Sulte compiled 447 kills, 546 digs and 60 aces over 149 sets. She was named MVP of the 20-team Dimond/Service Tournament and first team All-Region CIC, the top region in the state. A high academic student as well, this six-rotation standout is headed to the Naval Academy.

ARIZONA
Kierstyn Barton, 6-2 Sr. RS, Corona del Sol (Tempe)
Barton had an outstanding senior campaign in leading the Aztecs to the Arizona 6A title. The University of Washington recruit amassed 467 kills, 373 digs, 41 aces and 40 blocks as a low-error, six-rotation pin. A first team All-State selection, Barton might have been challenged for the Player of the Year honor by sophomore Teraya Sigler of 5A champion Horizon had she played more matches.

ARKANSAS
Kennedy Phelan, 5-8 Sr. S, Fayetteville
The first “no doubter” pick on this list, Phelan has been a four-year superstar for the Bulldogs. This past year, Phelan, a Florida State indoor and beach recruit, led Fayetteville to a 36-2 record and its third 6A title in a row. The senior amassed 977 assists, 227 digs, 217 kills and 80 aces. A coach’s kid, there is no skill that Phelan doesn’t do exceptionally. Teammate Brooke Rockwell and Brandon superstar Sunni Shepard both had outstanding 2022 campaigns, but Phelan stood high above everyone else this season.