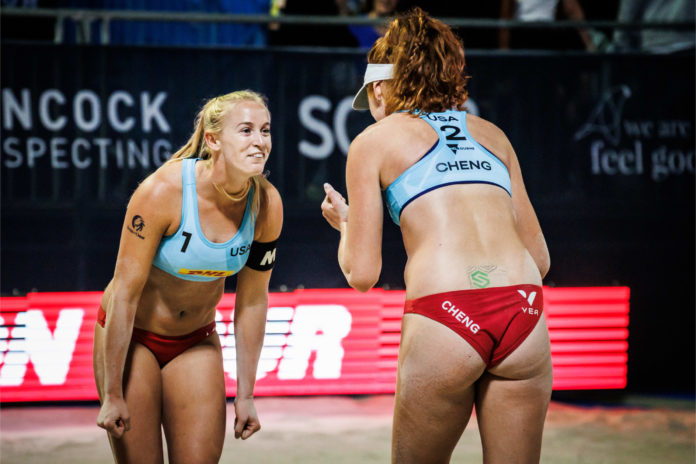 We have an Alix Klineman update, sort of, but first …

It wasn’t difficult to see why Kelly Cheng and Sara Hughes, and Sophie Bukovec and Sarah Pavan, immediately took to social media to celebrate what was then the best of Christmas presents: Wild cards into the season-ending Volleyball World Pro Beach Tour Finals in Doha, Qatar.

They were given an opportunity to play in one of the most exclusive events on the Beach Pro Tour calendar, with just a 10-team field and four guaranteed matches. They were gifted the perfect tune-up for the onset of Olympic qualifying, which begins the weekend following World Tour Finals, ironing out any kinks in their new chemistry in a risk-free setting — there are no points on the line, and therefore no points to lose, in the World Tour Finals.

That’s not the total purse, nor is that a typo: $150,000 is the prize given to the gold medalists this weekend in Doha.

Prize money has been a common gripe amongst players on the Beach Pro Tour. But that will not be a gripe this weekend, where 20 teams will compete for a grand total of $800,000 in prize money. Even the teams finishing last will pocket nearly $8,000, roughly the equivalent of winning a silver medal in a Challenge, as Italians and men’s wild cards Adrian Carambula and Alex Ranghieri did in Torquay, Australia in November.

“This is the culmination of an incredibly competitive year on the sand around the world and one look at the teams involved shows just how exciting and competitive the first ever Beach Pro Tour Finals is going to be,” Volleyball World CEO Finn Taylor said. “With Olympic champions, world champions, in-form teams and new and returning partnerships taking to the sand, we have an event that promises to be packed with intriguing stories from the best teams in the world.

“We are looking forward to receiving a wonderful welcome from our hosts at the magnificent Aspire Park in Doha, and are grateful to our partners at the Qatar Volleyball Association and Aspire Zone.”