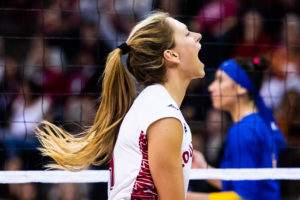 NCAA DIVISION I VOLLEYBALL CHAMPIONSHIP
CHI Center, Omaha, Nebraska
TEXAS (27-1) vs. LOUISVILLE (31-2), 8 p.m. Eastern, ESPN2
Series, last match-up: Texas leads 3-1, but the last time they played, in the 2019 regional semifinal in Austin, Louisville pulled off a stunning five-set upset of the then No. 2-seeded Longhorns. It was the breakout match for Louisville’s Aiko Jones, who had 23 kills and four blocks. Others from Louisville in that match included Claire Chausee and Amaya Tillman, and for Texas were Logan Eggleston (17 kills, four ace, five blocks), Asjia O’Neal and Molly Phillips.
Titles: Texas, in the last match of the season for the ninth time, won the 1981 AIAW national championship and the NCAA crown in 1988 and 2012 under current coach Jerritt Elliott. Louisville is the first ACC team to get this far.
Streaking: Texas has won 13 in a row since taking its only loss, in five sets at Iowa State on October 19. Louisville has also won 13 in a row since losing at Pittsburgh in five on October 23. Its only other defeat was to Ohio State on September 4.

“There’s not enough words to express what she’s done because it really is unbelievable. At one point, as a freshman, she wanted to quit volleyball. And so you look back at that and you’re like, I can’t believe we went from there to the ACC player of the year and a first-team All-American. And she’s just improved so much.”
— Louisville coach Dani Busboom Kelly on Claire Chaussee

When they play for the national title on Saturday night, Texas will certainly focus heavily on Louisville’s Claire Chaussee, the Cardinals’ leading attacker who has defied the odds en route to a season for the ages.

“We’ve just got to try to slow her down,” Texas coach Jerritt Elliott said. “We’re not going to stop her. We’ve got to see if we can contain her and get some good touches.”

Louisville advanced with a gripping five-set victory over Pittsburgh on Thursday as Chaussee led with 25 kills. She had just four errors in 49 attacks, hit .429, and had two assists, three blocks and three digs and continued a season in which the skinny outside hitter continued to confound opponents.

Texas may shut her down — it could be tough on both offenses, considering the the Longhorns rank 14th nationally in opponent hitting percentage (.163), while Louisville is No. 6 (.148) — but Chaussee usually gets…