Too much Texas as Longhorns sweep Louisville for NCAA volleyball title 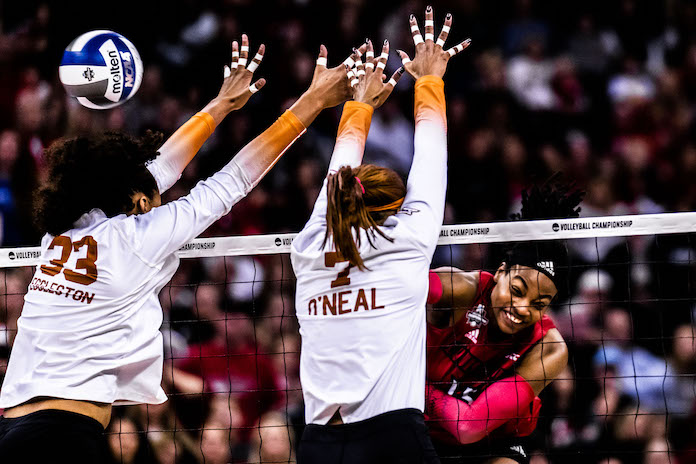 OMAHA, Nebraska — Too much Texas.

Ten years after, the Longhorns are the NCAA champions again.

The Longhorns clinched it on an ace by Keonilei Akana, a Nebraska transfer playing in front of a crowd of 16,952 in the CHI Center that was cheering hard for Louisville and its coach, former Husker Dani Busboom Kelly.

But Texas denied her becoming the first woman to coach a team to the NCAA Division I  championship and the ACC’s winning its first title.

Big 12-champion Texas (28-1), which won its 14th match in a row, staged a big third-set rally and got a magnificent performance from Logan Eggleston, who capped her career with 19 kills and a .341 hitting percentage. She added seven digs and three blocks, one solo.

Saige Ka’aha’aina Torrres had a kill, 37 assists, nine digs and a solo block. Her team hit .371. Zoe Fleck had 14 digs, five assist and two aces and Akana had four digs and the biggest ace of her career.

ACC co-champion Louisville’s season ended 31-3. The Cardinals, who had won 13 in a row, hit .189 and were outblocked 9-4. Claire Chaussee led with 12 kills but hit .158 to go with five digs. Anna DeBeeer had nine kills, hit .316, and had an assist eight digs and a block. Aiko Jones had eight kills with one error in 23 attacks, two digs and two blocks. Amaya Tillman had four kills, an assist, an ace, a dig and three blocks, one solo. Raquel Lazaro had two kills in four errorless attempts, 28 assists, an ace and 14 digs. Elena Scott had six digs, three assists and an ace.

Texas, which won the 2012 NCAA title and was so close so many times, led almost wire to wire this season. Nebraska was No. 1 in the AVCA preseason coaches poll, but Texas moved into the top spot after the first weekend on August 29. The Longhorns fell out of the top spot just once, after their only loss, in five at Iowa State, in the poll of October 24, but they were back at No. 1 the next week and have been there every since.

Louisville was as high as No. 2 and never lower than fifth.

These were also the top two teams in the RPI. Heading…