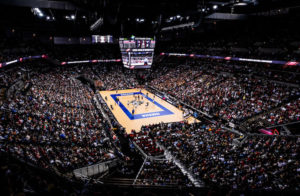 Freelance journalist Larry Hamel is a former Sunday sports editor for the Chicago Sun-Times and founder and coach of the Gold Coast Spikers beach-volleyball training program. Hamel lives in Chicago and plays both indoor and beach volleyball.

The Nielsen ratings for the NCAA women’s indoor volleyball championship match in 2021  provided the sport a welcome dose of holiday cheer.

Its cheeks weren’t quite so rosy this December.

Seven-figure overall viewership on ESPN2 and a rating that translated to 435,000 viewers in the 18-49 demographic, the group most coveted by advertisers, were causes for rejoicing in the halls of ESPN and for college-volleyball fans a year ago, particularly when those numbers demonstrated significant audience growth during the era of cord-cutting on cable TV. ESPN’s PR machine out of Bristol, Connecticut, flooded social media with a graphic that trumeted the “the most viewed college volleyball game ever on ESPN networks.”

However, that ratings bonanza, while not nearly fool’s gold, proved to be an anomaly, what is known as an outlier in statistical lingo. The NCAA final this past Saturday night on ESPN2 backtracked to 786,000 total-average viewers in a 2-hour, 5-minute telecast, a 33.8% drop from the 1,188,000 who tuned on December 18, 2021, when Wisconsin defeated Big Ten rival Nebraska in a five-set, 3-hour, 35-minute thriller.

Won in a sweep by Texas over Louisville, the title match on Saturday, December 17, finished 15th on the day on the widely referenced Showbuzz cable TV chart (see below) with a .22 rating (translating to 286,000 viewers) in the 18-49 demographic, a 33.3% drop from the .33 rating it posted last year, when it ranked sixth. The match in Omaha, Nebraska, on Saturday night drew a sell-out crowd of 16,952 to the CHI Health Center.

Despite hefty drops in total eyeballs and in the all-important ad “impressions” in the key demo, the ratings news wasn’t all negative for women’s college volleyball. Perhaps the most positive aspect was that the final drew a slightly higher rating among females (.22) in 18-49 demographic than males (.21), which is virtually unheard of in sports programming and likely to be noticed by advertisers.

The 786k/.22 numbers, posted while airing opposite the third game of an NFL triple-header on NFL Network (Bills-Dolphins, viewed by more than 11 million) and college football bowl games…