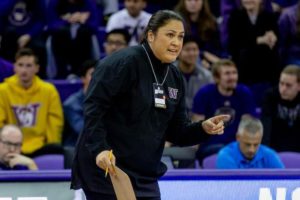 The coaching carousel continues to spin well for top assistants in Division I women’s volleyball as Washington, Arizona State and Kansas State filled their coaching openings in the past week.

All will be college head coaches for the first time.

It continues a trend in which assistants are being hired. The major exception was Keegan Cook leaving Washington for Minnesota, which created the opening for Gabriel.

Other top assistants who have moved into head coaching jobs in the past weeks include San Diego’s Alfee Reft going to UCLA, Pitt’s Lindsey Behonick going to Oregon State, Colorado State promoting Emily Kohan, and Kentucky’s Anders Nelson going to Vanderbilt to start that program from scratch.

Fresno State also hired an assistant, Leila Rosen of Michigan, who has coached with her husband, Mark, for 24 years. Mark Rosen was fired earlier this month.

Texas A&M tabbed Jamie Morrison, who was not with another program but has been an assistant at many.

A handful of openings remain, not the least of which are, of course, Michigan, and Loyola Marymount, created when head coach Aaron Mansfield went to Oklahoma, meaning there are now two Cooks in the Big Ten (Keegan at Minnesota and John at Nebraska) and two Mansfields in the Big 12 (Jason at K-State and Aaron at OU).

WASHINGTON: Leslie Gabriel, who played at Washington from 1995-98 and has been an assistant there since 2001, first to Jim McLaughlin and then to Keegan Cook, was announced this past Monday.

“It has been a dream of mine to be the head coach here and I am beyond excited to lead the women in this program,” Gabriel said.

Washington, which won the 2005 NCAA title, has been to the national semifinals four other times while Gabriel was with the program (2004, ’06,’ 13, ’20). Gabriels is the fourth woman to be the head coach at Washington and the first since Debbie Buse in 1991.

Washington, plagued by injuries last season, finished 20-11, 12-8 in the Pac-12. The Huskies lost in the first round of the NCAA Tournament to TCU.

ARIZONA STATE: JJ Van Niel, who spent the past five seasons at USC and three seasons before that at Utah, was announced as the new head coach on Thursday. He has extensive time in the USA national-team gym and also served…