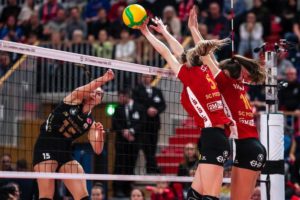 This is our weekly update on USA women playing professional volleyball around the world. Most of the players are former NCAA standouts. Many teams and leagues are on break for the holidays:

THY advanced to the round of 16 by sweeping Switzerland’s NUC Viteos 25-20, 25-20, 25-14. Madi Kingdon had four kills and two blocks for THY. Tessa Grubbs led NUC with 11 kills, three aces and a block. Madeline Haynes added 11 kills and a block while Kayla Lund also had 11 kills.

TFOC also advanced to the next round by sweeping Olomouc (Czech Republic) 28-26, 26-24, 28-26. Shannon Scully had the best match of her professional career so far as she had 20 kills (.436), three blocks, and an ace. Taylor Fricano had 11 kills, two blocks and an ace. Kendall White was credited with 60% positive reception.

Panathinaikos eliminated Nantes to advance to the round of 16 after winning 25-16, 25-18, 23-25, 25-19. Adora Anae led Panathinaikos with 14 kills and added a block. Taylor Mims was the top scorer for Nantes with 13 kills, two blocks, and two aces. Alli Stumler came off the bench to contribute 11 kills. Jaelyn Keene had seven kills and two blocks,