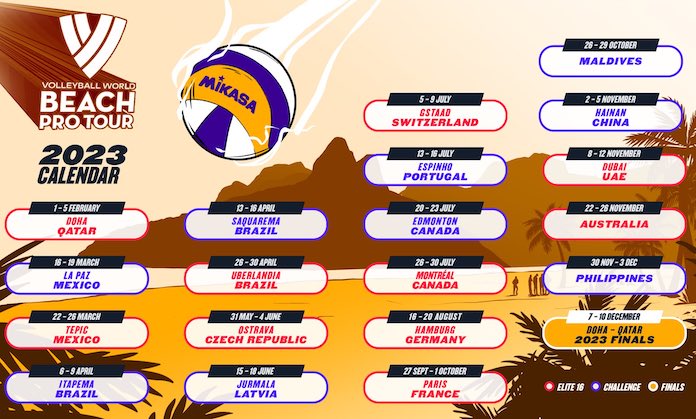 The 2023 beach volleyball schedule is set.

It’s more than just a schedule, too, as Volleyball World’s Beach Pro Tour is also the path to the Paris Olympics. This season marks the first year of Olympic qualifying, and the 16-month window to punch a ticket to the Paris 2024 Olympic Games begins in just two weeks, with the Beach Pro Tour’s season-opening event in Doha, Qatar on February 1.

That Elite 16, which comes on the heels of the 2022 World Tour Finals next weekend, features just two American teams on the men’s side. Theo Brunner and Trevor Crabb will be making their debut as a pair, and are currently seeded fifth in the qualifier. Evan Cory and Logan Webber, reunited after a season away from one another, are currently No. 12 in the qualifier. On the women’s end, Kelly Cheng and Sara Hughes are seeded second in the main draw, while Terese Cannon and Sarah Sponcil are No. 11. In the qualifier are Kristen Nuss and Taryn Kloth, and Emily Stockman and Megan Kraft. Betsi Flint and Julia Scoles, who were initially seeded into the main draw, dropped out.

After Doha, there will be a month-long break before the Beach Pro Tour resumes, resembling something the players have long been waiting for: A true tour. For years, the World Tour has been a bit of a misnomer in that it didn’t resemble a tour so much as it did a scatterplot. Players would travel from Brazil to China to Europe with little to no discernible order.

Volleyball World has changed that.

This season, there will be consecutive stops in Mexico, in La Paz and Tepic, before a month straight in Brazil, as Volleyball World will hit Itapema, Saquarema, and Uberlandia. A month later, Europe follows, hitting traditional stops in the Czech Republic, Latvia, Switzerland, and Portugal.

In July, professional beach volleyball alas returns to North America, as Canada is set to host consecutive events, in Edmonton and Montreal.

It gets spotty from there, as Hamburg will host the only major tournament — as of now — in August, and Paris the only event in September. The Maldives, which hosted its first professional event last fall, is again on the fall schedule, hosting a Challenge at the end of October. It kicks off an Asian swing, as China will host the following weekend, which precedes Dubai, the host of back to back Challenge events in 2022. Australia, host of three events in 2022, will again be on the November slate, as will the Philippines, which has hosted a number of…