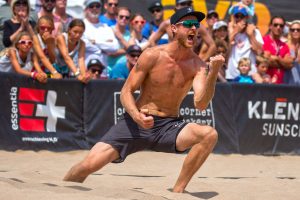 The first question many wondered: Was Theo Brunner being serious? Or was he just trolling, as he is apt to do on Instagram?

The recently named AVP and VolleyballMag.com Blocker of the Year had posted a series of pictures on his social media account, two of he and Chaim Schalk, then one of just him, then a broken heart, all of which was followed by a hilariously mislabeled caption in which USA Volleyball mixed up him and Schalk.

“I guess you don’t have to worry about that anymore,” Brunner wrote.

The next day, Brunner confirmed that he and Schalk, the No. 1-ranked team in the United States and AVP, the duo who had finished fourth in an otherwise disastrous World Championships for the Americans, were splitting up. And if they were splitting up, at the top of the ranks, then the trickle-down wouldn’t be so much of a trickle-down of partnership breakups as it would be an avalanche from the top to bottom.

The first such new pairing has been announced: Chaim Schalk and Tri Bourne.

“I just was looking to switch it up. I like change a lot, I like variety,” said Bourne, who competed in the 2021 Tokyo Olympics. “I get bored easily. Trevor [Crabb] and I turned potentially what was supposed to be a three or four event partnership into five years, split-blocking and entertaining. I’m just ADD and I just want to switch it up, do something new.”

It was a surprise enough to Schalk.

Bourne is on the heels of his first AVP MVP, and he and Crabb won Team of the Year by a landslide. Schalk, meanwhile, was defending for the man who just won his third career AVP Blocker of the Year. But a few weeks ago, John Hyden, Bourne’s first partner whose game shares more than a passing resemblance to Schalk’s, pulled Schalk aside and told him to check in with Bourne, gauge his interest in a potential partnership.

“‘I think you need to make a move, I think you’re the perfect fit for what he wants to do. I think you guys could be a great team and you could be that fit that he wants,’” Schalk recalled Hyden telling him. “He got the ball rolling, got me thinking a little bit.”