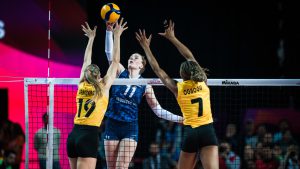 VakifBank and Eczacibasi complete the podium in Antalya

Prosecco Doc Imoco Conegliano claimed the Volleyball Women’s Club World Championship 2022 title, taking it back from VakifBank Spor Kulubu with a 3-1 (25-18, 23-25, 25-21, 25-21) victory in Sunday’s final in Antalya. It was the Italian club’s second gold in the competition, after winning the 2019 edition. Last year, they settled for silver after losing the final to VakifBank in a five-set battle.

The 2022 silver was the Turkish team’s eighth piece of hardware in the history of the Club World Championships as they extended their tradition of winning a medal every time they participate. Still the most decorated club in the competition, VakifBank’s collection now features four gold, two silver and two bronze medals.

The gold medal match was much anticipated by the fans not only because it was a remake of last year’s final, but also because it featured the first head-to-head encounter between opposites Isabelle Haak of Sweden and Paola Egonu of Italy, after they switched clubs between seasons. Haak inspired Imoco’s victory with a remarkable tally of 34 points, including two blocks. Egonu finished with “only” 27 points, including two blocks and two aces.

VakifBank recovered from Imoco’s 3-0 start to level the score, but the Italians broke away again with five points in a row on Haak’s serving turn towards an 11-6 lead. Despite Egonu’s nine points in the first set, VakifBank did not manage to catch up again. Another three in a row pushed the Panthers to a 24-17 set point and American outside hitter Kathryn Plummer crowned her solid performance in the set with a swing for 25-18.

A five-point run, including three back-to-back kill blocks, pushed VakifBank forward to a 10-6 lead in the second set. That was wiped out at 11-11. Shortly after, Imoco delivered four consecutive points to run off with a 17-13 advantage and it was VakifBank’s turn to play catch-up. They reacted immediately with a five-point series…