It’s all Greek to the Hawai’i men’s volleyball team as Chakas, Mouchlias lead the way 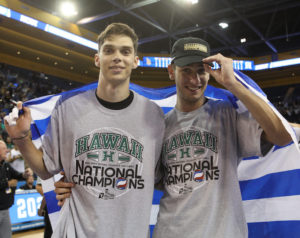 Chakas, a 6-3 outside, had 16 kills in the conference final, 19 kills and 10 digs against Ball State — a match in which Hawaii rallied from a 2-1 deficit — and 14 kills, four digs and an ace in the NCAA championship. He earned NCAA Tournament MVP honors for his effort.

It was a quantum leap for both players, now juniors, who are the focus as the Rainbow Warriors head into 2023. They open the season Thursday and Friday at home against Ball State.

Chakas, who earned Big West all-freshman honors, played in just more than half of Hawai’i’s sets during the 2021 season and appeared only briefly during the national semis and finals. Mouchlias didn’t play at all in 2021 as he recovered from an injury.

Veteran UH coach Charlie Wade said after they spent time with the Greek national team,  “I noticed during (last) season, even on road trips and stuff, I would see those guys in the hotel weight room, and on campus I see them taking extra reps in the weight room and really working on getting stronger.

“They sent me some video of them with their senior national team over the summer (2021), and I noticed that they’re both hitting the ball harder, and they (were) better at scoring out of system … That’s one of the things they’ve really stepped up in their game is their out-of-system scoring.”

Their development probably shouldn’t have come as a surprise. Both are volleyball lifers. Chakas’ father, Georgios, played professionally and later in rec leagues. Mouchlias’ father, Nikos, played for Greece’s Aris club team and later was an assistant with the national team, where his son and Chakas were under his tutelage.

Mouchlias and Chakas met when they were teenagers while playing in Greece’s junior national program, and it was Mouchlias, a year older, who first hatched the idea of playing college volleyball in the United States.

He said he saw a YouTube video of a Hawaii men’s match and thought it looked like “a really cool place to play.” Until then he didn’t even know volleyball existed in the U.S.

So he and his father…