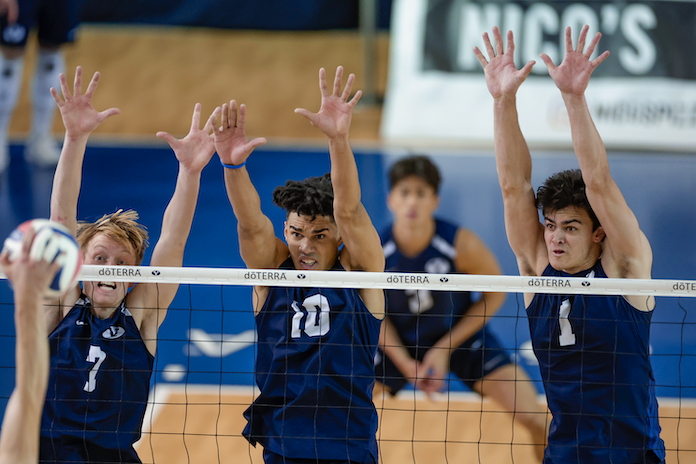 The first-week schedule remains light, but the result was heavy for previously winless Lincoln Memorial as the Railsplitters pulled off the biggest victory in program history with a five-set win at UC Santa Barbara on Friday.

Lincoln Memorial is a tiny independent from Tennessee that made waves in men’s college volleyball in 2022 as it got 20 wins, including an early season upset of Loyola, while UCSB is ranked No. 7 in the AVCA preseason coaches poll.

Friday numbers of note: In Grand Canyon’s four-set win over Lindenwood, Lindenwood won the second set 37-35 and for the match had three aces and 30 serving errors, 10 in that third set. The line of the night went to UC Irvine’s Francesco, who had 22 kills and hit .588 in a four-set win over Lewis, and UCLA hit .484 in a sweep of UC San Diego.

Friday’s recaps and top performances follow, but first at look ahead.

Also on tap are Lincoln Memorial against CSUN, UC Irvine vs. McKendree, NJIT vs. Purdue Fort Wayne and Saint Francis at Stanford. Not all are being streamed or televised but If it’s being shown, we have the viewing links in our VolleyballMag.com TV & Streaming Listings.

Lincoln Memorial, which was swept by Pepperdine on Wednesday and then lost in five on Thursday to UC San Diego, bounced back and stunned the home team 25-23, 21-25, 25-22, 17-25, 15-12. Shay Spadaro, a freshman outside from Orland, Florida, continued his strong start with 18 kills while hitting .484. He had three errors in 31 attacks and two digs, but no aces and six serving errors.

Against Pepperdine, Spadaro had 10 kills and hit .368 and against UCSD had 18 kills while hitting .484 with one error in 24 attacks.

Teammate Matthew Gentry had 12 kills with one error in 21 swings against UCSB  and Kohl Kutsch had three kills, 48 assists, five blocks and six digs. His team his .299 and had five aces and 21 errors.

UCSB, which opened with a four-set win Thursday over USC, hit .326 and had two aces and 16 errors. Ryan Wilcox led with 15 kills, an assist, both of those aces, a block and six digs. Nick Amoruso had 13 kills, hit .370 and had three blocks and seven digs. Donovan Todorov had 11 kills with on error in 14 attacks and Brandon Hicks had 10 kills with two errors in 15 attacks. Jack Walmer had three kills in five errorless tries, 50 assists and…