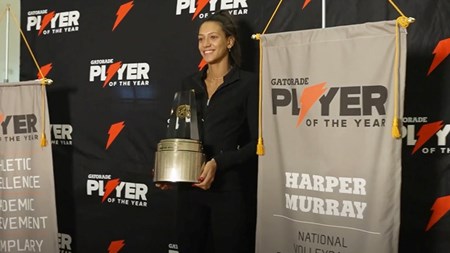 The 6-foot-2 senior outside hitter amassed 726 kills and 409 digs this past season, leading Skyline High School in Michigan to the Division 1 regional semifinals. Murray also recorded 86 service aces and 40 blocks, and she posted a .405 hitting percentage. Murray was named “Best Spiker” at the Under-19 Pan Am Cup in Tulsa, Okla., in August, where she helped the U.S. team to the gold medal. Michigan’s Miss Volleyball winner, Murray was an AVCA and MaxPreps first-team All-American. She concluded her prep volleyball career with 2,488 kills and 1,460 digs and also earned an AAU U17 national title in club play with Legacy in 2021. One of the nation’s top-ranked recruits by PrepVolleyball.com, Murray competed at the Under Armour All-America game earlier this month.

Murray maintained a 3.62 GPA in the classroom. She graduated from high school in December and will attend classes at Nebraska in the spring semester. A member of Ann Arbor Schools’ Rising Scholars Leadership Program, designed to create access and opportunity for underrepresented yet high achieving students, Murray volunteered extensively for the Vada Murray Endowed Fund for Cancer Research, named for her late father. She also served as a lead coach for the Skyline Rising Eagle Volleyball Clinic.

Murray is one of two incoming Huskers who was named a state Gatorade Player of the Year recipient this season. Setter Bergen Reilly was chosen as South Dakota’s Gatorade Player of the Year for the third time in her prep career after leading O’Gorman to the South Dakota Class AA state semifinals with 440 kills, 338 digs, 60 aces and a .307 hitting percentage playing as an outside hitter. Reilly was also the MVP of the U-19 U.S. team that won gold at the Pan Am Cup last summer. She too competed at the Under Armour All-America game in January and will join the Huskers when the spring semester begins next week.