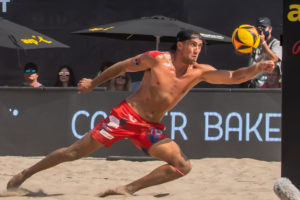 HERMOSA BEACH, Calif. — Theo Brunner knew, the moment he saw the incoming call, at an odd hour in the afternoon, and Chaim Schalk’s name on the screen of his phone, the conversation that was about to happen.

“I already had my spider sense going off,” he said earlier last week. And he was right. You don’t play more than a decade of professional beach volleyball without developing a firm understanding of partnership dynamics, and when one might be coming to an end.

Sure enough, by the end of that phone call, Brunner was a free agent, while Schalk had teamed with Tri Bourne. Bourne had previously broken up with his longtime partner, Trevor Crabb.

It would have been easy for Brunner to make a hasty, perhaps panicky, decision. The first event of the 2024 Olympic qualification cycle will be played as early as February. But you also don’t play more than a decade of professional beach volleyball without learning a thing or two about the consequences of poorly thought out decisions.

“I gotta be super careful,” Brunner said. “I’m not going to try and jump into anything too fast.”

Instead, Brunner, as he has been wont to do these past several years, dove deep into film, examining the team that was his greatest foil this season: Bourne and Trevor Crabb.

“Going back, I know Tri is the MVP and everything, so I expected him to be dominating, but Trevor played awesome in so many of those matches,” Brunner said. “And I was liking what I saw on defense from him.”

He liked it enough to schedule a phone call with Crabb, with whom he actually gets along very well, despite what social media may otherwise suggest. Crabb, like Brunner, was at the top of the metaphorical beach volleyball food chain. He had virtually his pick of partner.

“My main concern was if he was willing to be all f****** in, because this is all I got,” Brunner said. “The next two years I want to put everything I’ve learned to the test and go all out — video, in the gym, doing everything. He seemed super fired up so that’s what I was looking for.”

That phone call, and a day in between to think it over, was all the two needed: Theo Brunner and Trevor Crabb are making a run at the 2024 Paris Olympic Games.

“Playing with Trevor just spoke to me deeply, just f*** everyone else and play with Trevor,” Brunner said. “It’s actually crazy that people advising me on who to play with,…